To share your memory on the wall of William Penn, sign in using one of the following options:

He was born Wednesday, October 25, 1950 in Milan, Indiana. He was the son of the late Theoel... Read More
William Lamont "Bill" Penn, age 69 of Cookeville, Tennessee passed from this life Tuesday, June 30, 2020, at Cookeville Regional Medical Center.

He was born Wednesday, October 25, 1950 in Milan, Indiana. He was the son of the late Theoel and Margaret (Lambe) Penn.

Bill was a loving Husband, Father, Grandfather, and Brother. He was retired from the Kicks Radio Station with Stonecom Communications.

He graduated from Dillsboro High School in 1968. After serving 3 years during the Vietnam War Era in Germany, he graduated from the Columbus, OH Broadcasting School, Bill began his broadcast career in 1974 in Vevay, IN. He worked in radio in east TN including stops at Knoxville's WNOX. Penn arrived in Cookeville in 1981 working for owners including Dwight Henry and Joe Wilmoth. Stonecom graciously wanted to do something to honor Bill's long-time service to this community, his loving nature, and his just plain goodness. His teammates believed that the best way to honor Bill was to find the next Bill Penn -- by giving a student in the Upper Cumberland the chance to follow in his footsteps through a career in radio, television, journalism marketing or public relations, Thus the Bill Penn Broadcast Scholarship was born and is awarded to a deserving student every year. Bill has always been a leader in his Church, loving his Lord & Savior Jesus Christ. He was active at Eastwood Baptist Church and then joined The River Fellowship. He played a part in erecting the beautiful cross that overlooks the highway.

One of Bill's proudest achievements was the many foster children he cared for and mentored. It culminated in the adoption of his precious Jacob, Catalina and Elena Penn.

Sunday morning, Rock 93-7's David Hunter will present a special edition of Rockin The Rock in tribute to Bill Penn. The program airs 8-10am on Rock 93-7.

Bill is survived by his Wife Debra Sue Penn of Cookeville, TN

2 Sisters and Brothers-in-law:
Wanda and Jim Trester of Aurora, IN
Joyce and Joe Conlon of Warsaw, IN

A host of Nieces and Nephews.

Please visit www.crestlawnmemorial.com and sign the online guest register and send a message to the family.

To send flowers to the family or plant a tree in memory of William Lamont Penn, please visit our Heartfelt Sympathies Store.

Receive notifications about information and event scheduling for William

We encourage you to share your most beloved memories of William here, so that the family and other loved ones can always see it. You can upload cherished photographs, or share your favorite stories, and can even comment on those shared by others.

Sharla and Britlee Moates and Family sent flowers to the family of William Lamont Penn.
Show you care by sending flowers

Posted Jul 02, 2020 at 12:46pm
So very sorry to hear of Bill's passing. He was a faithful face at The River Community Church and always had a gentle smile. Praying for you guys. - Steve Chatman
Comment Share
Share via:
S

Posted Jul 02, 2020 at 10:46am
So sorry for you all's lose . I remember him giving me rides on his motorcycle when I was very young in grandpa's back yard . Sharon and Tim Telinda.
Comment Share
Share via:
S

Posted Jul 01, 2020 at 07:51pm
I'm so sorry to hear of Bill's passing. I always enjoyed going to church with the entire Penn family at Eastwood Baptist Church many years ago. Bill operated the sound system & I was the church pianist at the time. I don't remember ever seeing him without a smile. He was always ready, willing, and able to jump in and do whatever was needed. Helping others seemed to bring him joy. He also operated the sound system at my son's funeral back in 2009. My most sincere condolences to the Penn family. -- Melinda Norris (formerly Burnette)
Comment Share
Share via: 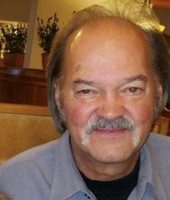