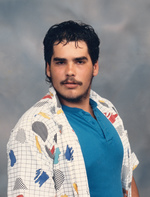 He was born Friday, April 5, 1968 in Cookeville, Tennessee, he was the son of Lynn Thomas and the late Judith Anderson Thomas.

Mr. Thomas was a loving Father, Son, Brother and friend to all who knew him. He loved Nascar Racing, Wrestling, Bowling, and Cooking. He used to bowl on a league before he became disabled.

In addition to his father, he is survived by:

1 Son and daughter-in-law:
Robert and Lisa Violette of Sparta, TN

1 Stepsister and spouse:
Misty and Jason Carr of Baxter, TN

A host of Nephews: Matt, Blaine, Michael, and Lucas