To share your memory on the wall of Roger Bohannon, sign in using one of the following options:

Provide comfort for the family of Roger Bohannon with a meaningful gesture of sympathy.

Print
Roger Wayne Bohannon, 79, of Cookeville, passed away on Monday, October 7, at Vanderbilt University Medical Center from complications following a stroke. He was born on June 16, 1940.

He is survived by his wife of 59 years, Vivian Bohann... Read More
Roger Wayne Bohannon, 79, of Cookeville, passed away on Monday, October 7, at Vanderbilt University Medical Center from complications following a stroke. He was born on June 16, 1940.

He is survived by his wife of 59 years, Vivian Bohannon, daughter Vicki (husband, Charles) Stockton and son,

Roger was preceded in death by his father, Marvin Bohannon and his mother Elva Ramsey Bohannon, stepmother Buena Rockwell Bohannon, his only sister and brother-in-law, Gaynell and David Hall as well as an aunt, several uncles, and cousins.

Roger was a graduate of Algood High School. He owned and operated Economy Motors for over 25 years in Cookeville. He attended Eastwood Baptist Church. Roger worked hard to provide for his family. He enjoyed getting together with his family and friends to visit and enjoy good food. As a boy, Roger helped his father grow gladiolus which they sold to Gunnell’s Florist.

Visitation will be held on Thursday, October 10, from 5-8 pm at Crest Lawn Funeral Home.

Funeral services will be Friday, October 11 at 3:00 pm, from the Chapel of Crest Lawn Funeral Home, with Bro. David Wayne Copeland officiating. Interment will follow in Crestlawn Cemetery.
Read Less

We encourage you to share your most beloved memories of Roger here, so that the family and other loved ones can always see it. You can upload cherished photographs, or share your favorite stories, and can even comment on those shared by others. 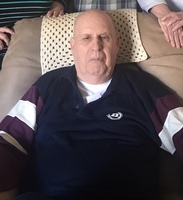