To share your memory on the wall of Jean Fields, sign in using one of the following options:

Provide comfort for the family of Jean Fields with a meaningful gesture of sympathy.

She was born Tuesday, May 21, 1929, in Baxter, Tennessee. She was the ... Read More
Jean (Greene) Massa Fields, age 90 of Millington, Tennessee passed from this life Monday, April 6, 2020, at Baptist Reynolds Hospice House in Collierville, Tennessee.

She was born Tuesday, May 21, 1929, in Baxter, Tennessee. She was the daughter of the late Charles and Esther (Henson) Greene.

Jean was named after Jean Marie Faircloth MacArthur. She was a Graduate of Tennessee Technological
University and attended and taught at Baxter Seminary along with husband Elmer Massa, later administrative assistant at Upper Cumberland. Motivated ambition in Jean’s early teens positioned her to be a private secretary to Dr. Harry L. Upperman and she continued her shorthand dictation into her later years. Jean also worked at Kemper Insurance in Chicago. Residing in Carthage, TN led to working for the Smith County Board of Education and teaching Continuing Education. Her drive and work ethic proved successful in becoming the first comptroller for HCA under Dr. Frist. Jean later married W.E. Fields Lt. Col in the Air Force. Jean was a dedicated member of the Church of Christ.

Her gift of love was reflected by her many cherished friends, and her Motto was keep on keeping on and never, never, never, give up.

You lived your Life always thinking of others. You put others first with Kindness, Generosity, and Love. You passed from this life as you lived it "not wanting to be a burden" For the thousandth time, you were never a burden yet you carried many burdens for others. We all have been Blessed, warmed by God's Light luminating through you and permeating our souls. Thank you Blessed Mother, Lovingly Melanie.

In addition to her parents, Jean was preceded in death by her First Husband: Elmer Massa, Second Husband: W.E. Fields, 2 Sisters, Ruth Mynatt, and Marguerite Hayes, and 1 Brother: Charles Greene.

In lieu of flowers, donations may be made to Baptist Reynolds Hospice House at 1520 W. Poplar Avenue Collierville, TN 38017.

To send flowers to the family or plant a tree in memory of Jean Fields (Greene), please visit our Heartfelt Sympathies Store.

Receive notifications about information and event scheduling for Jean

We encourage you to share your most beloved memories of Jean here, so that the family and other loved ones can always see it. You can upload cherished photographs, or share your favorite stories, and can even comment on those shared by others.

Posted Apr 17, 2020 at 04:37pm
Jean Massa Fields was my dear friend and teacher. I was blessed to have known her. We shared so many fond memories. She was
my friend and Mr. Massa was my boss at Upper Cumberland Electric Membership for many years. I will always think of you two.
With Love, Eunice Campbell Manning.
Comment Share
Share via:
CV

Posted Apr 08, 2020 at 01:26pm
Jean Massa Fields was my beloved teacher so many years ago in Baxter, Tennessee. My sister Martha and I learned shorthand and to type fast with ten fingers under her wise leadership. What she taught us back then served us well in finding jobs and developing careers that lasted decades. She used to call me the Eager Beaver and in our old age my sister and I used to joke about this. When I'm typing with all my fingers today I often remember her fondly. I will never forget her. She was a sweet person and a respected role model. I'm happy to know that she lived a long life and that she enjoyed it fully surrounded by loving children and grandchildren. R.I.P my dear, dear teacher.

Posted Apr 08, 2020 at 11:47am
So sorry for your loss. Aunt Jean was always such a sweet person. Our prayers are with you.
Marcia Lowe
Comment Share
Share via: 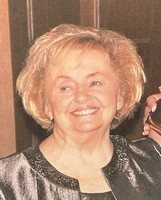