To share your memory on the wall of James Sturtevant, sign in using one of the following options:

Print
James Russell Sturtevant, age 73 of Cookeville, Tennessee, passed from this life on Tuesday, April 7, 2020 at his home surrounded by family.

He was born to the late Russell and Jean Sturtevant on Friday, March 7, 1947 in Stoughton, Mass... Read More
James Russell Sturtevant, age 73 of Cookeville, Tennessee, passed from this life on Tuesday, April 7, 2020 at his home surrounded by family.

Mr. Sturtevant graduated from Silver Lake Regional High School in 1965, and received vocational certifications as an Automotive Mechanic, an Aviation Master Mechanic, an Aeronautical Master Technician, Modern Engine Servicing, and Industrial Electrical Technology. He opened and owned Jim's Repair Shop in Halifax Massachusetts for 19 years from 1970 to 1989. He was employed with Russell Stover as an Electrical Maintenance Tech for 12 years.

He enjoyed model trains, video games, Ford Mustangs and other classic cars, horses, and working around his property. He was a dog lover who always had his pet Jack Russell Terrier named Cleo in his lap.

James will be cremated at Crest Lawn Funeral Home. The family will not hold a memorial service at this time. The family wishes to thank the kind staff at Cookeville Regional Hospital, Signature Healthcare, and Avalon Hospice of Cookeville, Tennessee for their devoted care. In lieu of flowers, donations may be made to the American Cancer Society.
Read Less

To send flowers to the family or plant a tree in memory of James Russell Sturtevant, please visit our Heartfelt Sympathies Store.

Receive notifications about information and event scheduling for James

There are no events scheduled. You can still show your support by sending flowers directly to the family, or planting a memorial tree in memory of James Russell Sturtevant.
Visit the Heartfelt Sympathies Store

We encourage you to share your most beloved memories of James here, so that the family and other loved ones can always see it. You can upload cherished photographs, or share your favorite stories, and can even comment on those shared by others. 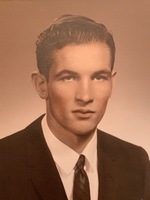