To share your memory on the wall of Grady \"Frank\" Tittle, sign in using one of the following options:

He was a graduate of Science Hill High School in Johnson City, TN, and went on to earn a Bachelor of Science in Industrial Technology at East Tennessee State University where he met his wife of sixty years, Carol Ann Tittle. He is survived by his wife, Carol, and their two children, Suzanne Michele Sweet and husband George Michael Sweet, Jr.; Grady Franklin Tittle III and wife Penelope Dawn Tittle. His grandchildren, Kristen Sweet Lundholm and husband Christopher Lundholm, Kevin Sweet and wife Megan Sweet, Karoline Sweet Scott and husband Christopher Scott, Mason Nash and Kensley Nash; his great grandchildren Kellen, Hadley, and Harper Lundholm, Liam Scott, and Rylie Sweet and many nieces and nephews. He was preceded in death by his daughter Allison Jean Tittle, as well as his brother, Walter Tittle and his 4 sisters, Edith Tittle, Pauline Hemphil, Thelma Banning, and Velma Crawford.

Frank proudly served in the United States Army for 23 years during which he served two tours in Vietnam and various other bases around the world while achieving the rank of Major prior to retirement. While serving honorably in the military he was awarded multiple Bronze Stars for heroic achievement during wartime and the Purple Heart for being wounded during wartime, as well. He retired from the 101st Airborne Division out of Fort Campbell, KY in 1982.

He was a member of First Baptist Church in Cookeville, TN, for over 50 years and was always grateful to be a part of such a loving Christian family, which FBC provided throughout his life.

As everyone knows, he was a man on the go constantly. His favorite pastimes were baking pecan pies for loved ones, spending time with family, and playing with his grandpuppies, Fletcher and Stella.

The family will greet friends to share memories on Friday, October 30, from 5 p.m. until 8 p.m. at the Crest Lawn Funeral Home in Cookeville, TN. There will also be a short visitation on Saturday Morning at 10:00 a.m. until the celebration of Frank’s life begins at 11:00 a.m. at the Crest Lawn Funeral Home for which Brother Scott McKinney will be performing the pastoral services. Following the celebration, there will be a graveside moment for family members.

In lieu of flowers being sent to the funeral home, with Frank being a former ROTC instructor at Tennessee Tech University, the family asks any donation be made toward the Tennessee Tech Scholarship Foundation. https://www.tntech.edu/education/support.php

To send flowers to the family or plant a tree in memory of Grady "Frank" Franklin Tittle Jr., please visit our Heartfelt Sympathies Store.

Receive notifications about information and event scheduling for Grady "Frank"

We encourage you to share your most beloved memories of Grady "Frank" here, so that the family and other loved ones can always see it. You can upload cherished photographs, or share your favorite stories, and can even comment on those shared by others.

3 trees were planted in the memory of Grady "Frank" Tittle

Posted Nov 14, 2020 at 03:33pm
Grady: Was probably the nicest man that I ever met in my life. I was a 19 year old Military Policeman in Garmisch Germany From 1973-1975. Part of my responsibility was to register vehicles and weapons that were owned by US military personnel. Grady would often come into my office and talk with me about what I was going to do with my life, education etc. He was an amazing, caring and outstanding role model to me. He always encouraged me to do good and to do something meaningful with my life. I never forgot him and still have a going away card with his signature that he gave me when I left the military. I am so thankful that I got to know him, if only for a short time. John Barrett 206 552 5466.
Comment Share
Share via:
GK

Posted Oct 31, 2020 at 09:21am
Dear Carol, we pray the love of God enfolds you during your journey through grief. Frank will remain in our hearts forever with prayer and thoughts.

Posted Oct 28, 2020 at 12:50pm
So saddened for you all loss, my heart was broken to hear passing of Frank, he was a Godly man loved his wife,children and family. He will surely be missed and he made the best pecan pie .I am definitely going to miss him. Hope Carol is doing well at this sad time
You all in my thoughts and prayers. Patsy Johnson Gist
Comment Share
Share via:
JH

Posted Oct 27, 2020 at 11:14pm
I highly respected Frank and enjoyed working with him at Cookeville funeral home. He was a man of great character and Christian devotion. He seemed to always have a spring in his step and could be friends with anyone that came through the door. I remember asking him on one occasion how he was able to move so quickly at his age he smiled and replied its because I have a dose of hummingbird extract everymoring . Well he is in heaven now with Jesus and with that ill be glad to see him again some fine day.
Comment Share
Share via: 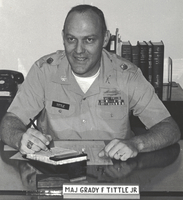