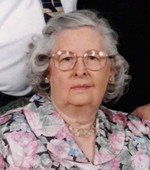 She was born Friday, March 12, 1926, in Baxter, Tennessee. She was the daughter of the late Alfred Whitney Maxwell and America Avo (Worley) Maxwell.

Mae was a loving Mother, Grandmother, and Great Grandmother. She attended Twin Oak Elementary and graduated from Baxter Seminary. In her younger years, Mae worked a variety of retail jobs in the Detroit area including Hudsons Department Store. Moving back to Cookeville in her forties she worked and retired from Tutco Inc.

Mae is survived by:

1 Son and Daughter-in-law:
Ronald and Teresa Burgess of Cookeville, TN

In addition to her parents, she was preceded in death by 1 Daughter: Phyllis Diane Payne, 5 Brothers, and 6 Sisters.