To share your memory on the wall of Barbara Fletcher, sign in using one of the following options:

Barbara attended rural grade school at the Trumbly school in the area of Elgin, Kansas and graduated from high school in Sedan, Kansas. She played third base as the lone girl on the boys' baseball team. She attended Christian College in Columbia, Missouri before transferring to Oklahoma State University, where she graduated in Dietetics. After a one-year residency, Barbara became a Registered Dietician.

While at Oklahoma State, she met and married Dr. Kent J. Fletcher in 1959. Early in their married life in Platteville, Wisconsin, Barbara and Kent became the proud parents of three sons and a daughter. During her many years in Platteville, Wisconsin she served in many ways including President of both Platteville Hospital Auxiliary and PEO. Barbara served two terms on the Platteville City Council. She served her church in various roles: banquet planner, Sunday school teacher and in the Stephens Ministry. She had various board roles with the library, Jamison Museum, Jaycettes and United Methodist trustees. Other purposeful work included: Meals on Wheels, Hospice, NAMI (National Alliance on Mental Illness), American Association of University Women, as well as, working behind the scenes to assist Kent in his busy veterinary practice. Barbara was a lifelong member of the United Methodist Church and a member of Mary Martha Circle. Barbara was a member of Chapter AO- PEO. She was committed to the many places in which she lived, modeling service to others. Barbara and Kent moved to Cookeville, TN in 1999 and immediately fell in love with the community.

Barbara's priorities were steadfastly her family, her church, and her friends. She was an accomplished cook and baker who always had an incredible gift in the kitchen. Molasses bread and chili were favorites. She was a Barbara and not a Barb. Spumoni ice cream was her favorite. She liked cats (Mackie) and really liked dogs as noted by her playful pats on the side of their snouts. She loved birds and flowers. Like Kent-she was a huge Cubs fan. Her thoughtfulness for others was unique. A meal when in need or a letter or card to friends and family across the country were staples of her life. Barbara was an amazing homemaker and taught her children to be independent and kind. Practical and no nonsense, she gave her children great freedom and trusted her instincts that they could “figure it out.” In her later years she told her kids she had never had to worry about them. Her children, grandchildren and Kent were the joys of her life.

Barbara was preceded in death by her parents, Sid and Thelma, as well as her brother Richard. She is survived by her beloved husband of over 60 years, Kent, children-R. Frank (Wife Dr. Nicole) Gainesville, FL; Dr. Geoffrey (Wife Karyn) Phoenix, AZ; Susan Fletcher Skees, Pittsburgh, PA; and Dr. Sidney (Wife Dr. Amy) , Charlotte, NC as well as 10 grandchildren she adored.

Celebration of Life for Barbara Fletcher will be held Saturday, September 5, 2020 at 10:30 am from the chapel of Crest Lawn Funeral Home. Visitation with the family will be held from 9:30 am until time of service at the funeral home. Interment of her remains will be held Wednesday, October 7, 2020 at 10:30 am in Sauk - Prairie Cemetery in Prairie du Sac, Wisconsin.

To send flowers to the family or plant a tree in memory of Barbara S. Fletcher (Smith), please visit our Heartfelt Sympathies Store.

Receive notifications about information and event scheduling for Barbara

We encourage you to share your most beloved memories of Barbara here, so that the family and other loved ones can always see it. You can upload cherished photographs, or share your favorite stories, and can even comment on those shared by others.

Posted Aug 24, 2020 at 02:53pm
Dear Geoff: Please accept our most heartfelt sympathies for your loss. Our thoughts are with you and your family during this difficult time.

Flowers were purchased for the family of Barbara Fletcher. Send Flowers

Posted Jul 06, 2020 at 06:59pm
So sorry Kent, always enjoyed our time spent with you and Barbara. She was a treasure for us all, and always had the nicest smile that made you feel so welcome. RIP BARBARA, an angel who truly deserves her wings.
Tom Daniel
Comment Share
Share via:
TS

Posted Jul 06, 2020 at 06:25pm
Dear Kent and Family,
I have just learned of Barbara’s passing, and I wanted to let you know how very sad I am. She was always so sweet and kind to everyone, and reading her obituary, I see what a fine and caring woman she has been all her life. You have had one of God’s special angels in your family! Kent, you were so good to Barbara and took such wonderful care of her in her last few years. Please know my prayers and sympathies are with you.
Love, Tanya Samples
Comment Share
Share via:
KT

Posted Jul 06, 2020 at 03:12pm
Kent, my thoughts and prayers are with you and your family. Barbara was such a sweet, loving person! She was lucky to have you take such good care of her at the end! You will miss her. 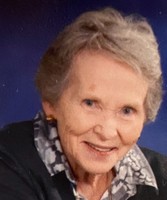